Who is Sensei Mike Bern? 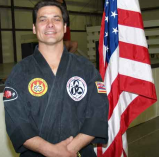 I began the my journey into the martial at the age of twelve being taught by a family friend who was studying kenpo at the time, my parents wanted me to be able to protect myself as we lived in a not so nice part of town at the time in Southern California and a couple of years later the family moved to Lake Tahoe California; soon after the move I began studying kung fu for about a year and a half until my instructor moved from the area.

The Martial Arts have always fascinated me, the principles; physical, mental and spiritual, the philosophy's and the history have influence and apply in every part of our daily lives and the physical training has been the best form of exercise for me that I have found to keep in shape and because of that I kept searching for a good school and after awhile of not studying I found the Kenpo Karate of South Lake Tahoe club and  began studying Kosho ryu Kenpo Jujitsu with Sensei Zane Graham and Sensei Susan Kezich for six and a half years and where I earned my rank of Shodan (1st degree black belt) in 2002.

Travels to conventions and seminars were and still are part of our training and also competitions to test our skills while winning awards for kumite (sparring) and Kata (Forms) but also to learn from others and their styles of martial Arts was and still is a very rewarding part of the training, unfortunately the school closed and the Sensei's retired from teaching. a few years after the schools closing and training on my own but still looking for another instructor I started teaching on my own and opened my own school.

High Desert Martial Arts was founded in 2004 by Sensei Milton (Mike) Bern as a way to continue the teachings and traditions of his teachers, past instructors and the American Jujitsu Institute (AJI).

At that time it was recommended that I seek out Professor Ken Eddy to continue my martial arts training, the level of expertise and understanding of the Arts that I found with the teachers and students of this school just amazed me and I was hooked. I continue to travel to Reno Nevada a couple times a week to train at his school in Kodenkan Danzan ryu Jujitsu, and the healing arts of Professor Henry Okazaki taught by Professor Ken Eddy. I am also very fortunate to train with Professor Thomas Rennie with his extensive backround in Aikido and Danzan ryu jujitsu at the same dojo where he blends his Aikido training to enhance our motions in jujitsu.

(Hey, when you find a great teacher you do what you can to learn from them)

Sensei Bern is ranked through the American Jujitsu Institute, founded in 1939 and the oldest Martial arts organization in the United States and currently holds ranks of;