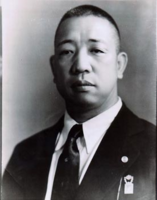 Professor Seishiro (Henry) Okazaki, Born in Fukushima Prefecture, Japan in 1890, he and his family moved to Hawaii in 1906. Shortly after, he was diagnosed with a lung disease thought to be Tuberculosis, and was expected to die. “With courage born of desperation,” Prof. Okazaki knocked on the door of Yoshimitsu Tanaka at the Yoshin Kai Dojo, and took up the study of Yoshin Ryu Jujitsu. Shortly after, his Tuberculosis disappeared and his health returned completely. Feeling Jujitsu had saved his life, Prof. Okazaki dedicated the rest of his life to Jujitsu.

While in Hawaii, he mastered Yoshin Ryu, Iwaga Ryu, and Kosogabe Ryu Jujitsu. He also studied Kodokan Judo, Chinese Boxing, Filipino Knife and stick fighting, Hawaiian Lua, American Boxing and Wrestling, and Spanish Dirk Throwing. In 1924, Okazaki toured Japan and visited over 50 dojo, learning secret techniques (675 in all) and the art of Kiaijutsu (focusing breath power). It is from these roots that Danzan Ryu comes. Prof. Okazaki took the crucial step of modernizing the traditional arts he had been taught. He did homage to his roots by retaining a large portion of the Yoshin Ryu curriculum and many of the ceremonial traditions of Japanese culture. Yet he also included pistol defense, wrote the first book on women’s self defense in the US, put together police and commando courses, and, most importantly, began accepting non-Japanese students. By applying the lessons of the past to the problems of his time, he created one of the first modern systems of jujitsu, and certainly the first founded in the United States.

On his return from Japan, Okazaki began teaching. In 1929, he moved from Hilo to Honolulu and opened the Nikko Sanitorium at the old Chester Doyle residence where he practiced his Seifukujutsu. In the back, he started the Kodenkan (school of ancient traditions), and began teaching his complete Danzan Ryu. Okazaki taught all comers, regardless of race or sex, feeling that everyone could benefit from Jujitsu. For this, he was ostracized by the Japanese community for teaching secrets to the enemy.

U.S. servicemen came through the Kodenkan and were issued instructor's licenses, then returned to the mainland to spread the system. Since those days, several different groups have formed, all teaching what they believed Professor Okazaki taught. Throughout his life, Professor Okazaki taught thousands of people, established the first American system of Jujitsu, and the oldest martial arts organization in the United States. He died from a third stroke in 1951.